Editor: Each week Felice will be talking about the best and worst digital marketing campaigns from the previous week. If you spot any you’d like us to include then pop a comment on this post, on our Facebook page or on Twitter and if we use it we’ll give you a credit in the next post.

We’ll not only be talking about campaigns but also any examples of digital marketing activities which highlight the best and worst practices online. Over to Felice……..

The hall of fame

If you’ve missed this little gem then you’ve most likely been living under a rock for the past week. As part of the promotion for the upcoming remake of Carrie, the film company put together one of the best (and most terrifying) pranks of all time. The prank was staged in a coffee shop in new York where some unsuspecting customers witnessed what appeared to be a young girl throwing a grown man against a wall using telekinetic abilities.

After assaulting the man, the girl then threw tables across the room while customers jumped back with shrieks of horror. Of course the whole prank was a total setup and only a handful of customers were real but the result is incredible and quite realistic.

The video has gone viral this past week and has picked up almost 40million views which is phenomenal given it was only uploaded 10 days ago. While the producers have still gone through the traditional trailer route for the movie, this is a really fun way of adding to the buzz in the run up to the movie’s release.

If any of you missed it, here’s the clip. Hold onto your coffee cups!

The wall of shame

Now this one is a bit subjective and you may disagree that this belongs in the bad marketing section but I have a few issues with this one. Having followed the Kelloggs ‘Give a Child a Breakfast’ campaign and while i’m not wholly behind the producer of sugary foods to be pushing their products onto children, I support their ethos to provide children with a breakfast.

However, there’s a fine line between whether the campaign mainly benefits the good cause or mainly benefits the company’s image. While nearly all corporate giving is somewhat self serving, crossing this line can be the difference between strengthening a reputation and significantly damaging it. And this week Kelloggs blurred that line if not stormed right over it with their RT campaign on Twitter.

The fundamental criteria for these types of campaigns is that they are mutually beneficial. As a customer you may decide to select a Kelloggs brand of cereal as opposed to a competitor because you want to support the campaign. You still get your cereal and Kelloggs gains a customer and the children get a breakfast. Everyone is happy. But this week Kelloggs took the campaign to Twitter and offered to donate a breakfast for a retweet. And here we find the issue, as did Kelloggs going by some of the responses. 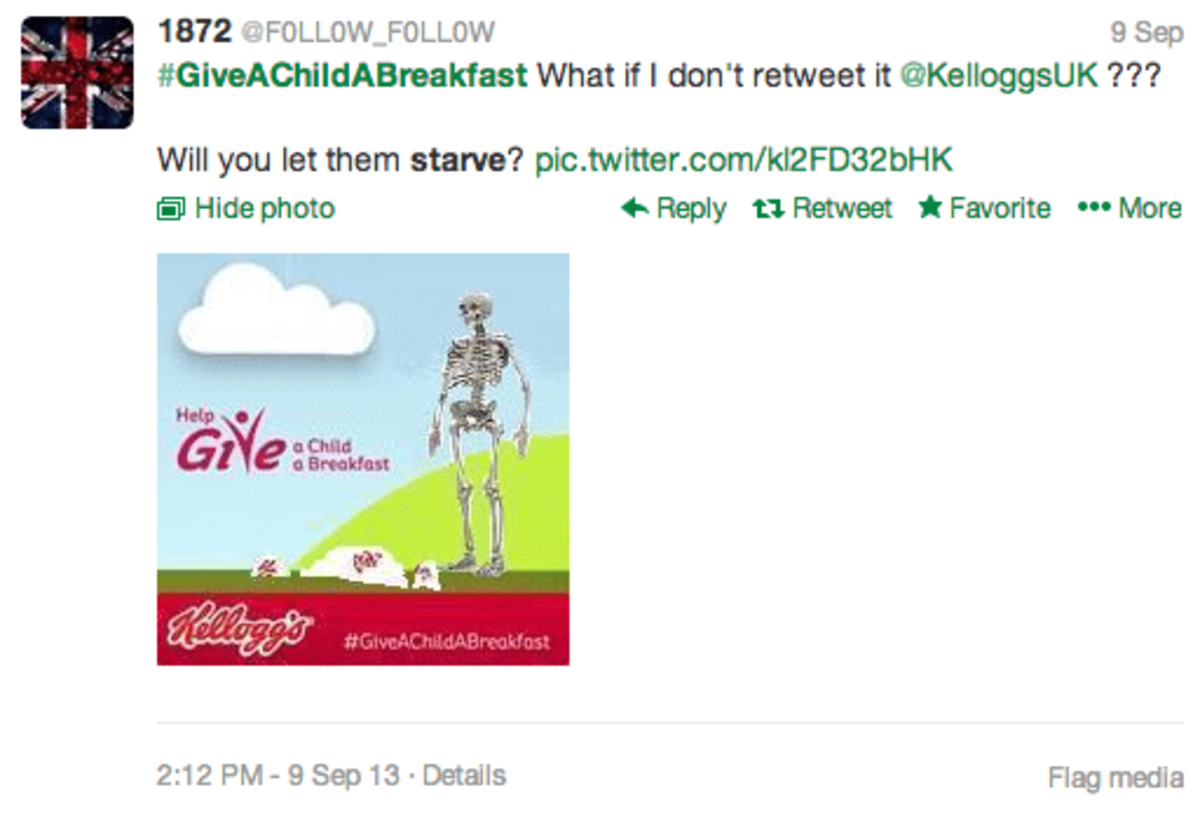 In this instance you are asking people to give something for nothing and throwing in a little bit of guilt at the same time for those who chose not to. Don’t get me wrong, I’m all for corporations getting involved in charitable giving but in the same way as I detest those street collector when they ask ‘Have you got a second to spare for children with cancer?’ I know it’s manipulation at its worst but I still feel like a complete monster when I say no and keep on walking.

This one definitely goes on my ‘bad’ list this week.

Which Is The Fastest Growing Social Media Network in 2021?