We’ve been contemplating adding Google Webmaster Tools which has now been rebranded to “Search Console” for a while. For one it’s a free tool whereas the other tools we’ve looked at you have to pay for. For another its made by Google, rather than trying to reverse engineer Google. But Search Console has really become a very useful tool and is probably now at a stage where it can replace paid for tools for some users.

The key thing about Search Console which is different to other tools we’ve compared is that it only gives you data on your own domain, not your competitors. To use it you have to verify you own the website by linking to your Google analytics account or uploading a file or meta tag onto your website. By doing this you unlock lots of useful and free data from Google.

Inside Search Console you’ll find a number of useful tools for both analysing your site and reporting information back to Google about your site (sitemaps, international targeting, disavow links). For this review we’re going to concentrate on some of the features of Search Console which overlap with the features you might be paying for from other tools to help you decide whether its possible to switch away from paid tools to Google’s free tool.

The best and worse thing about Google Search Console is that it provides data straight from the horse’s mouth. The link data you get here are the links which you know Google has found. The crawl reports show you issues which Google has identified. Whether you find this useful, or unsettling, will depend on how much you trust Google to provide accurate and honest data to SEO’s. There is certainly a fear among many SEO’s I know that search console data can be a red herring and that Google doesn’t reveal all of the data which it holds on your site. For me personally, I use Google data alongside other third party data when doing research.

For large sites with lots and lots of links this sampling of link data will mean Google aren’t going to show you all the links which are out there, so you’re still going to need a third party data source like Open Site Explorer or MajesticSEO to give you a full picture of all your links. That said if you’re reviewing your own links, for example as part of a link audit, I’d definitely recommend starting with the links which Google report in Search Console as these are links which Google is telling you are important.

Google have never liked SEO’s running ranking reports with third party tools like AWR, hence there was much interest when Google started showing rankings for your own keywords in Webmaster Tools (as it was then known). Although Google never refer to these as rankings.

When this data first launched it was pretty much useless. Google would tell you your site was ranking in position 3 for a massive keyword like ‘cars’ when in reality your site would never show anywhere in the top 100 results. Thankfully this data has become far more useful as the toolset has grown and Google now gives you estimates not only of your position for a keyword but also the number of impressions and clicks for your site on that keyword in Google results. 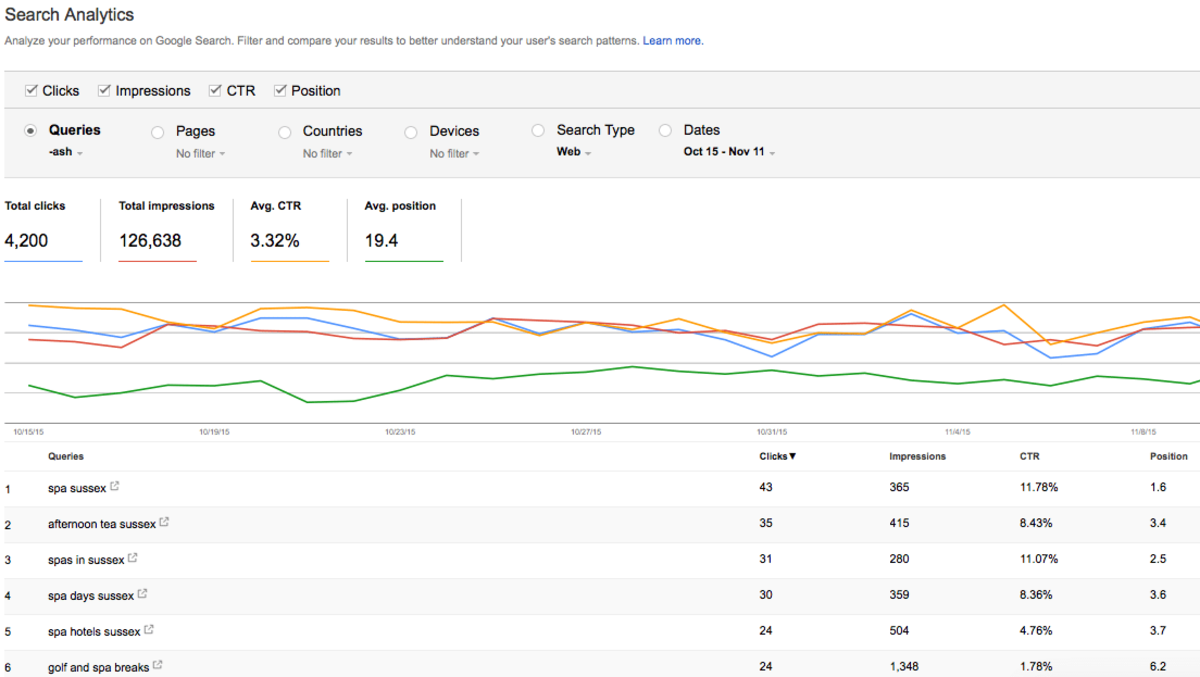 The data still isn’t completely accurate. If you check he position Google is reporting for your keyword its likely you’ll find your site in a different position. That’s partly because rankings fluctuate with so many factors these days the numbers which Google show in Search Console are an average. Its also likely in part due to the fact Google don’t want to give SEO’s precise data in Search Console.

With the removal of search query data from Google Analytics in 2014 the data now provided in Search Console is probably the best information available to SEO’s about the keywords which are referring visitors to your website. In my opinion that makes this an essential tool for anyone involved with SEO.

One of the features Search Console has in common with a number of tools we’ve looked at in this report are the various crawling and indexing tools. Most SEO tools provide some sort of crawling tool which scans the pages of your site to mimic the way a search engine would index your pages, looking for errors and areas where you can improve your technical SEO setup. Search console has various reports which for some webmasters might replace the need for external, paid for tools to do this job. In Search Console there’s various reports which you’ll find very useful when conducting an onpage SEO review. The navigation through reports in Search Console is horribly unintuitive so you might need to click around to find these tools;

Index Status – Gives you a snapshot of the number of pages from your domain in Google’s index – great for identifying problems like a drop or spike in indexed pages (caused by duplication) but unlike paid tools like the Website Auditor in SEO Powersuite, Google don’t give you a list of the exact pages in the index. 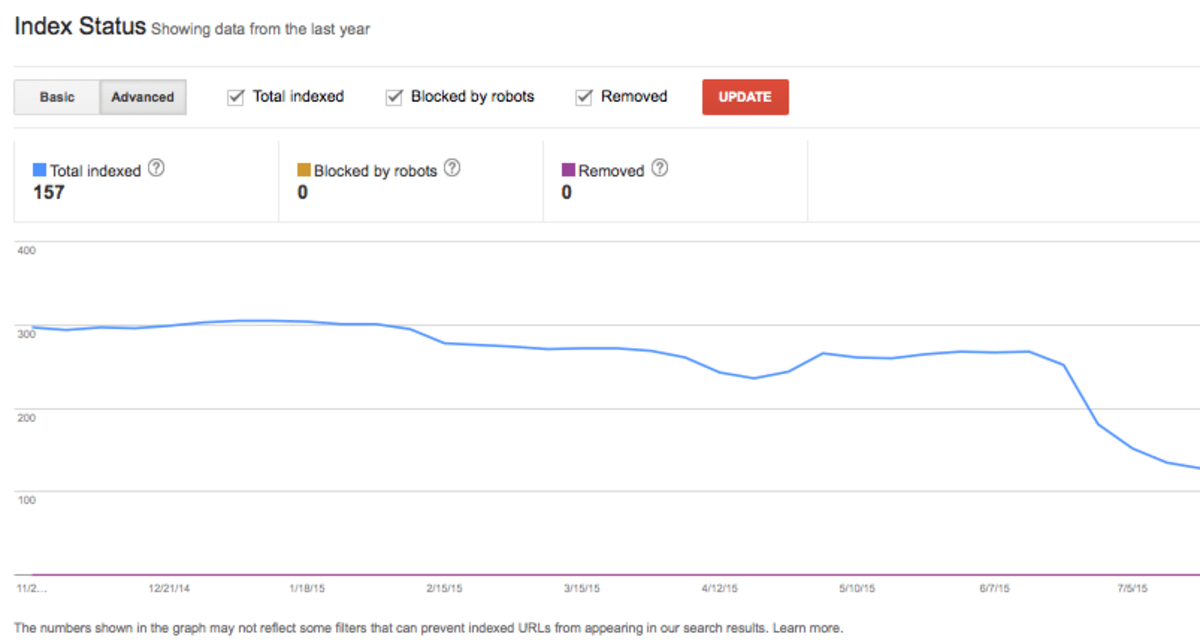 Crawl Errors – Shows you URL’s where Google have found errors like broken links (“404 errors”). This is a really useful report as it doesn’t only show you the broken links but also the pages which they’re linked to from. Keep an eye on this report and regularly fix any broken links to prevent losing link equity and dropping content out of Google’s index. Personally I’m more likely now to use the crawl error report in Google Search Console than I am to use a website auditor to find and fix broken links on my site. Google just seems to find issues which other tools never uncover.

HTML Improvements – Another feature of many paid SEO tools is a report on errors to common SEO elements like page titles and meta descriptions. In the HTML improvements report within Search Console you can now get this data direct from Google. The information here is top level and not as detailed as you’d get from a paid crawling tool but still some useful recommendations and a good indication of the onpage issues which Google thinks are most important.

The downside of using Search Console for auditing websites is that you can only get this data on sites you own, meaning if you want to audit a site for a potential SEO client as part of a pitch, you’ll either need to get access to their Webmaster Tools or you’ll need a third party crawling tool.

Something I’m surprised doesn’t feature more heavily in the onpage recommendations made by the paid for SEO tools we’ve looked at is Page Speed. 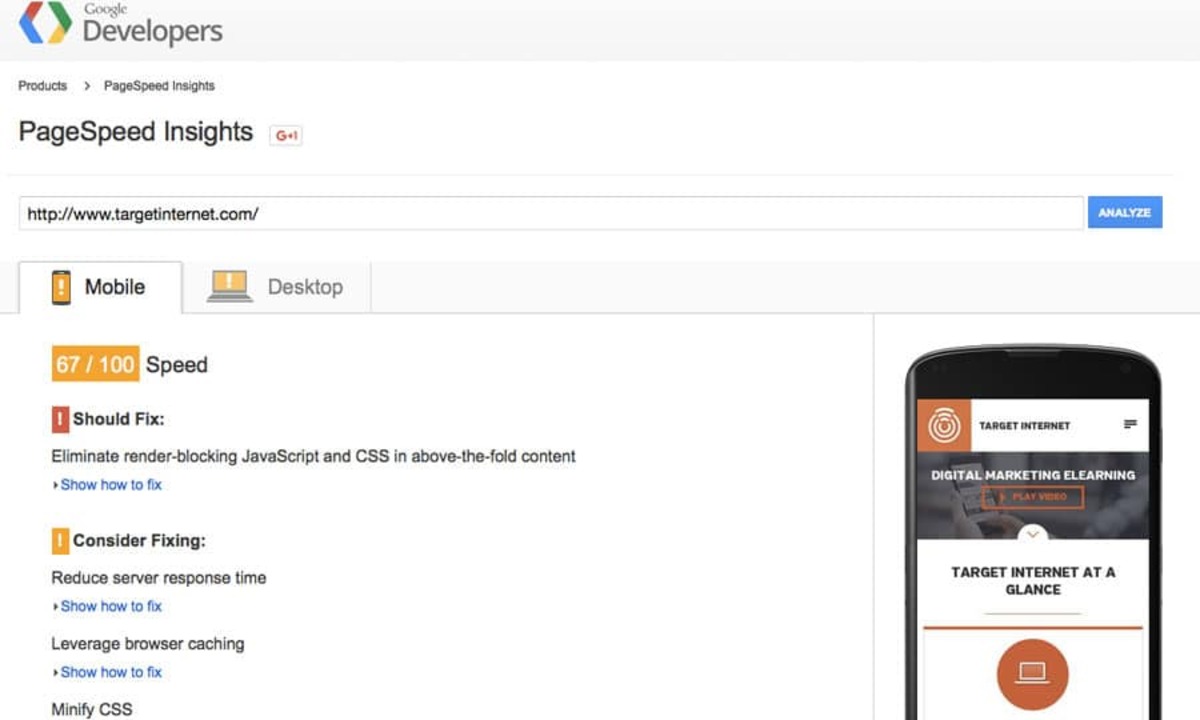 Hidden under “other resources” in Search Console is Google’s excellent PageSpeed insights tool (you don’t actually need to be signed into Search Console to use this tool). This is going to crawl your site and give you recommendations for ways to increase page speed for better performance. Page Speed is still such a massive issue on so many sites I see and it can also affect your rankings in search results so this is definitely an essential tool for me when auditing a website and Google’s recommendations for improving page speed are really useful for developers.

The most appealing thing about Webmaster Tools has to be the price tag. As with other Google products like Analytics and Tag Manager its completely free to use. This helps level the playing field when it comes to SEO data because whether you’ve got a million pound SEO budget or you’re a one man band you get access to the same data and reports from Google. Professional SEO’s aren’t going to be able to replace paid tools with Search Console yet but it is becoming more useful and may in time replace the need for other tools like the website auditors you find inside Moz, Raven and SEO Powersuite.

It can only be a good thing that Google is becoming more transparent and reporting more data back to Webmasters. Of course its up to the individual whether you choose to trust this data or not. Either way Search Console gives you a direct line into Google and I would recommend setting it up for any site you’re doing SEO work on. While I’ve replaced some of my paid tools with reports which I can now get from Search Console (like broken links for example) I think there will remain a place for paid third party tools built with features for serious SEO’s and agencies.

How Can We Do Keyword Research For Free (5 Tools)