A Marketer's Guide to NFT's

What is exactly an NFT, and how do NFTs apply to marketing?

It can be hard to find a reliable answer to basic questions about digital’s new hot topic – so we’ve written a clear, balanced marketer’s guide to NFTs which doesn’t ‘funge’ the facts.

Read on for an explanation of NFTs and how they work, plus some detail on how marketers have been using NFTs, and why you should think carefully before using them in your own marketing work.

NFTs are encrypted tokens used to claim ownership of digital assets such as images, GIFs and social media posts. The tokens take the form of a piece of data, visible in the holder’s cryptocurrency wallet, which claims ownership of another digital item. For instance, we could mint an NFT that says the bearer owns the Target Internet logo.

‘NFT’ stands for ‘non-fungible token’, which basically means ‘non-replaceable token’. This refers to the idea that every NFT has unique value, and therefore cannot be swapped like-for-like, in the way that two £10 notes could be.

When you buy an NFT, this doesn’t necessarily make you the legal owner, or copyright holder, of the associated asset. Really, you’re just buying the NFT itself. In a conversation on WiRED’s Gadget Lab podcast, NFTs were likened to ‘Own a star’ certificates, where the product that you buy is not really the star itself; rather, it’s a certificate that claims a connection between the star and the certificate owner.

So, for some buyers, the intrinsic value of an NFT is the bragging rights, or the emotional connection, that comes with owning the sole NFT relating to a particular digital asset. Others view NFTs as a speculative asset which can ultimately be sold on for profit.

NFTs as we know them have their roots in the underground crypto technology of the mid-2010s, including NFT-like ‘coloured coins’, which were used to represent assets such as coupons and property shares on Bitcoin blockchains.

Much like Bitcoins, each NFT has its details – including a record of its current and previous owners – stored in an online, public ledger. This is done using a decentralised technology known as a blockchain, which is formed between thousands of computers which communicate with each other in order to validate pieces of data such as NFTs and cryptocurrencies. This distributed approach to public ledger-keeping makes it very unlikely that an NFT could be lost, deleted, counterfeited or wrongfully modified.

It’s only since around 2018 that NFTs have entered the mainstream consciousness. Public interest in the technology has been especially high since a series of landmark news stories in 2021, including Jack Dorsey’s $2.9mn sale of his first tweet, and the $69mn sale of a work by a digital artist known as Beeple at Christie’s auction house.

Taking multiple blockchains into account, the overall global volume of NFT sales in 2021 was $24.9bn[https://www.reuters.com/markets/europe/nft-sales-hit-25-billion-2021-growth-shows-signs-slowing-2022-01-10/].

How do NFTs work?

The first step in an NFT’s existence is minting. In this process, a file containing the original digital asset, e.g. a JPEG or MP4, is converted into an encrypted token and uploaded to a blockchain platform such as Ethereum.

Minting can be done via a blockchain-connected application such as OpenSea or Rarible. These platforms often make their money by charging a minting fee, typically in the range of $50-200, and/or taking royalties on sales of the NFTs they mint.

During minting, a separate asset called a Smart Contract is created and uploaded to the blockchain. Not to be confused with SMART goals, these contracts verify details of an NFT, such as the identity of the owner, and the stipulations around future sales of the NFT (e.g. royalties must be paid to a certain party).

Once an NFT has been minted, it is held on the connected blockchain platform, where it can be traded to other people on the blockchain.

An NFT may be resold multiple times. Each time the NFT changes hands, the new transaction is added to the blockchain’s public ledger.

How are NFTs being used by marketers?

Given the attention-grabbing sums of money now changing hands in return for NFTs, we’ve been unsurprised to see several brands jumping on the bandwagon. Let’s take a look at some of the most common use cases:

NFTs sell particularly well as collections – notably including the Bored Ape Yacht Club and CryptoPunks collections of character JPEGs, which can trade hands for the equivalent of a six-figure sum in GBP per NFT.

Several major brands have minted their own collectable series of JPEG-linked NFTs. In May 2021, Coca-Cola sold a collection of four “multi-sensory, friendship-inspired NFTs” for over $500,000. And in January 2022, toymaker Mattel made its own entry into the NFT market, with an auction for a series of three unique Barbie avatar NFTs, which were designed in collaboration with the fashion brand Balmain.

NFTs – and by extension, NFT collections – derive much of their perceived value from the sense of scarcity they evoke. This has given mass-manufacturing companies, including Coca-Cola and Mattel, the opportunity to make a rare connection between their brands and the idea of exclusivity.

As Adage reports, Adidas launched an interactive art project that will eventually be sold as an NFT on 20 January, 2022. The project encourages fans of the brand to make an artistic contribution to a digital collage, in return for a cut of the proceeds after the canvas is sold as an NFT. In effect, the brand is using the products of audience engagement to generate the incentive for audience engagement.

The simplest and most direct use of NFTs in marketing is as a way of selling digital media products.

There are countless examples of this type of NFT use, from when the rock band Kings of Leon released an album as an NFT, to gaming giant Ubisoft’s move to link in-game items to NFTs.

For many digital media producers, NFTs have provided a revenue stream in a context where extracting money from consumers may otherwise be difficult. But the question is: are NFTs the right way to win that revenue?

What are the pitfalls of NFTs?

Depending on who you’re asking, NFTs are either a transformative tech that’s uniquely capable of commodifying digital assets; or they’re a thinly veiled scam with an unacceptable carbon footprint. Arguably, both statements are true.

For some buyers, there’s nothing wrong with this proposition. The thing they want is the NFT itself, which they may regard as unique, collectable and valuable.

However, for many others, part of the appeal of buying a digital asset would be the right to use that asset exclusively, or the potential for monetisation, e.g. through selling copies of a digital artwork as merchandise. Owning an NFT does not give you the right to use an asset in these ways, because the NFT does not confer legal ownership of the original asset or its copyright.

The separation between NFTs and the original assets they describe raises the risk of morally dubious minting and selling of NFTs.

For instance, someone might take an original work by a digital artist, mint an NFT of the artwork, and then sell the NFT for profit, without giving anything to the copyright-holding artist. Because the NFT does not relate to the copyright for the original work, and because there is currently a lack of specific legislation around NFTs, the person who minted the NFT might get away with actions that would normally constitute copyright infringement.

With this in mind, we would advise anyone considering buying an NFT to do thorough research into the copyright status of a digital asset, before they buy an associated NFT.

The problem of NFTs violating other parties’ copyrights is not just theoretical. In fact, IP infringements involving the tokens have become widespread, leading to the addition of ‘No NFT minting’ warnings to many artists’ online platforms – such as the excellent ai_curio_bot on Twitter, pictured below. 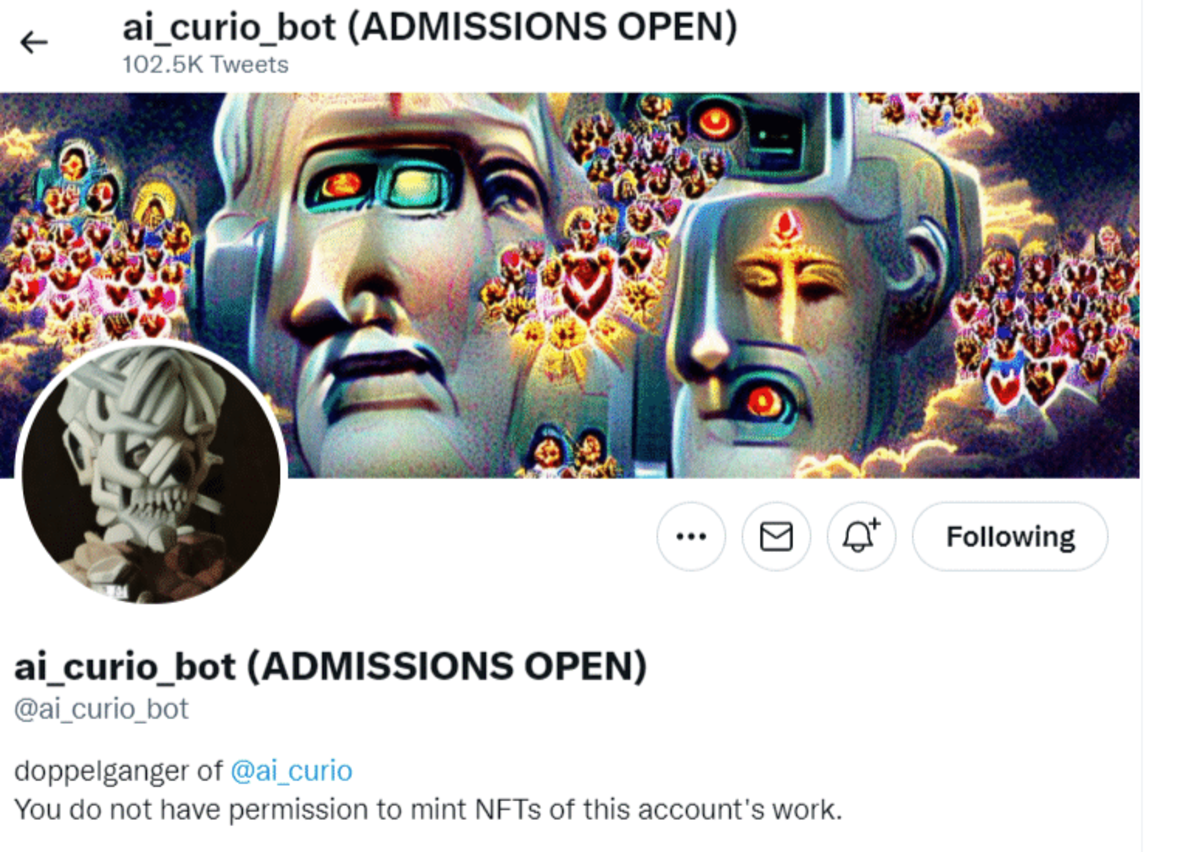 As we’ve established in a previous section, the terms of NFT transactions are governed by documents called Smart Contracts, which are uploaded to the blockchain as a pair with each newly minted NFT.

So, you should check for contradictory T’s and C’s published elsewhere, before agreeing to a Smart Contact.

The really big problem with NFTs – and, indeed, with the vast majority of blockchain-based tech – is the environmental cost.

An extraordinary level of computing power is required to validate activities on the blockchain, such as the minting and sale of NFTs. As The Verge reports, research by Atken, a digital artist, has shown that the average NFT has a carbon footprint equivalent to more than a month’s worth of electricity use for an average person living in the EU.

Clearly, if everyone started to mint and trade NFTs in their current form, the environmental impacts would be significant.

Brands that wish to join in with the NFT trend should think very carefully about how they play into this picture, and how that may affect their green credentials.

Several major companies have already faced a backlash after announcing plans relating to NFTs, including game publisher Square Enix, whose interest in gaming applications of NFTs was criticised by fans, and Legendary Pictures, which was called out for hypocrisy after announcing a collection of NFTs based on the publisher’s film ‘Dune’, which carries an environmentalist message.

As things stand, it seems that brands can’t get away with promoting NFT use, while at the same time claiming green values.

What could happen with NFTs in the future?

Considering the many pitfalls surrounding NFT use in marketing – and we haven’t had time to name them all in this guide – we wouldn’t recommend that your brand goes right ahead and starts using this technology. For the average business, there are still too many question marks over the legitimacy and the environmental impact of NFTs.

With that said, the future of digital media ownership could still be non-fungible – especially if NFTs with a lower carbon footprint can be developed.

The demand for NFTs among certain market segments – especially digital-enamoured millennials – could point to a shift in how we value digital media. It could also modify how we attach social prestige to our social media profiles. Who’s to say that a rich portfolio of digital assets couldn’t one day carry the same clout as a gallery wall filled with Picasso paintings?

Even within the crypto world, it’s widely believed that the NFT phenomenon could turn out to be a bubble. Our advice to marketers is that for now at least, you should ignore the hype surrounding NFTs, and focus instead on the underlying questions:

How is digital culture changing? How is the relationship between people and digital media assets changing? And how do these changes relate to my business?

NFTs may be a total sham – but they represent something real.